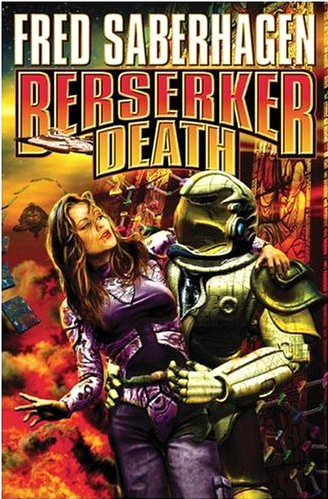 Ages ago, perhaps before the human race even existed, two war-maddened races fought -- and though both are extinct, their Frankenstein weapon, the Berserkers, robotic asteroid-sized warships, still follow their program. And now the relentless death machines have crossed the galaxy, to encounter an equally relentless opponent: humans . . .

Three complete novels set in a seemingly endless war against death itself:

THE BERSERKER WARS: The millennium-long battle between humans and the killing machines, with heroes, cowards, villains -- and even a prankster.

BERSERKER KILL: A Berserker has stolen a biolab filled with human zygotes. Can its pursuers discover its secret plan before it's too late ?

--From the paper edition blurb.

For excerpts see the individual titles.

Also, the short story Wings Out of Shadow (an abreviated version illustrated by Eddie Johnson)
appears in its entirety in BERSERKER WARS.