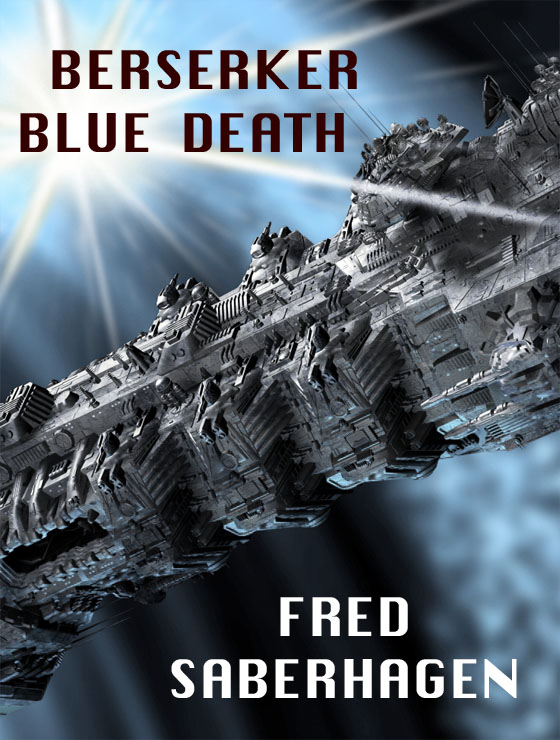 Available as an e-book from Kindle, Nook, Kobo and iBook

The great blue berserker's destruction of the human colony Shubra was swift and merciless.

Niles Domingo is a man with a mission: Vengeance at any cost. With one small ship, he sets out against the great berserker called Leviathan, tracking it through the interstellar mists of the Milkpail Nebula. He is sure he is ready for anything. But nothing can prepare him for the astonishing discoveries that lie between him and Leviathan.

Review: PUBLISHERS WEEKLY, Oct 11, 1996
"In this latest novel, Saberhagen draws on such epics of vengeance as THE SEARCHERS and MOBY DICK. The loss of his family and of his left leg drives Niles Domingo to pursue the immense berserker known as Old Blue or Leviathan. Although he succeeds, his fanaticism transforms him into an inhuman acolyte of the the godlike machine, a role that comes to define Domingo's purpose and existence. One of the best entries in the series."
BERSERKER BLUE DEATH
by Fred Saberhagen
The bright orange lights of the alarm began to flash as if in deliberate synchronism with the first notes of live wedding music coming from the electronic organ. The lights of the alarm were positioned all around the top of the circular wall, about three meters high, that rimmed the huge domed room, and they extended up against the lower portion of the huge clear dome itself, making it impossible that they should not be seen. The orange lights were eerily beautiful against the driving, rolling whiteness, shot through with distant pastel colors, that seemed to fill all space outside the dome.

In Synchronism with the first flash of the lights, the audio component of the alarm came blasting with almost deafening loudness through the rich sounds of the wedding processional. At the impact the organ music trailed and shuddered away to nothing, while the piercing blatting of the alarm itself kept on. And on.

Niles Domingo swore under his breath, involking gods and creatures stranger than the gods. Reflexively he called on beings he did not believe in, that at most were no more than half believed in even by the people of the farthest and mosst isolated colonies. He had a sense of the last night's bad dream intruding into reality.

At the moment the alarms came on, Domingo was standing with his daughter at one end of the long aisle that passed diametrically under the center of the domed assembly hall. Maymyo's hand first tightened on her father's arm, then slipped away, as if she were determined to leave him as free as possible of personal distraction.

Domingo turned to look into his daughter's dark-brown eyes, at her lovely face framed in the pure white of unfamiliar ceremonial lace. She was gazing back at him trustfully. Her expression said that her father was still her first source of guidance on any problem, on how to deal with a wedding or an attack alarm. Or, as now, both at the same time.