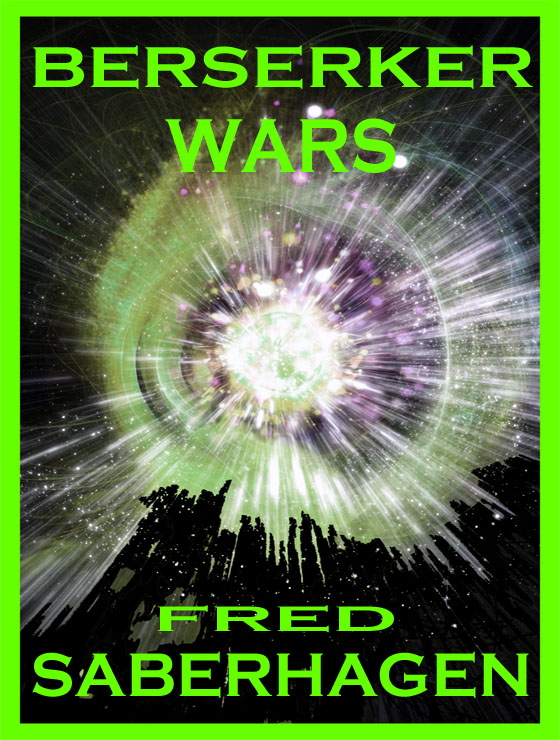 Available in e-format from Kindle, Nook, iTunes, and Kobo.


"The Berserker stories are war stories, but war stories more in the tradition of Red Badge Of Courage, or All Quiet On The Western Front." --- Baltimore Evening Sun
BERSERKER WARS
by Fred Saberhagen
Copyright (c) 1981 Fred Saberhagen
Published by JSS Literary Productions

Hal: We're here, surrounded by friendly Carmpan of whom we rarely see more than one or two at a time, and then usually only with some partial or symbolic physical barrier between us. Everything is going pretty much as expected, we have experienced nothing really contrary to the experience of a thousand years' occasional and arm's-length contact with the race. By the way, it's beginning to look, to me at least, less and less coincidental that our first meeting with the Carmpan coincided almost exactly with the beginning of the Berserker War. I'll have more to say on this point presently.

Let me first describe what I consider to be our main achievement so far on this mission. To begin with, the structure in which we are living and working is best described as a large, comfortable library, and we have been given free access to storage systems. (I hope, by the way, that the exchange team of Carmpan researchers on Earth are being treated as well as we are here.) Much of this mass of stored data is, as we expected, still unintelligible to us and so far useless. But quite early in the game our hosts pointed out to us, for our special attention, an alcove containing what we've come to call the private archive of the Third Historian. Having looked at the files therein, my colleagues and I agree unanimously that they were very probably compiled and largely writeen by the same Carmpan individual who used that name (or title) as signature to the messages he composed and sent to our ancestors some generations ago, when the Berserker peril was even greater than it is today.

Since a copy of this report is going directly to the military, Hal, bear with me when I pause now and then to insert a paragraph or two of history. We can't reasonably expect that all the readers over there are going to know as much of it offhand as we do.

As life may transmit evil, so machines of great power may hand on good.

Taken from "Wings Out Of Shadow"

In Malori's first and only combat mission the berserker came to him in the image of a priest of the sect into which Malori had been born on the planet Yaty. In a dreamlike vision that was the analogue of a very real combat he saw the robed figure standing tall in a deformed pulpit, eyes flaming with malevolence, lowering arms winglike with the robes they stretched. With their lowering, the lights of the universe were dimming outside the windows of stained glass and Malori was being damned.

Even with his heart pounding under damnation's terror Malori retained sufficient consciousness to remember the real nature of himself and of his adversary and that he was not powerless against him. His dream-feet walked him timelessly toward the pulpit and its demon-priest while all around him the stained glass windows burst, showering him with fragments of sick fear. He walked a crooked path, avoiding the places in the smooth floor where, with quick gestures, the priest created snarling, snapping stone mouths full of teeth. Malori seemed to have unlimited time to decide where to put his feet. WEAPON, he thought, a surgeon instructing some invisible aide. HERE--IN MY RIGHT HAND.

From those who had survived similar battles he had heard how the inhuman enemy appeared to each in different form, how each human must live the combat through in terms of a unique nightmare. To some a berserker came as a ravening beast, to others as devil or god or man. To still others it was some essence of terror that could never be faced or even seen.