THE WATER OF THOUGHT 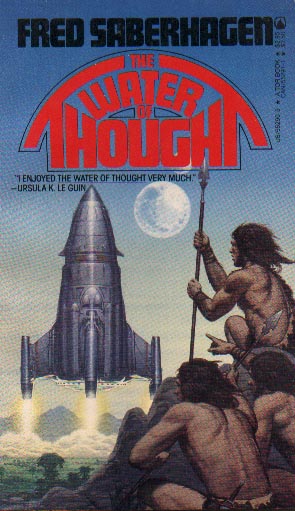 IT DROVE MEN MAD . . . but each in a different way. In one the effect was total utter addiction. In another, a compulsion to absolute obedience. In a third, idealistic monomania. In a fourth, unending, all-consuming lust. Of all the enigmas surrounding the planet Kappa, none was more inscrutable than that mysterious liquid central to all the native rites.

There was, in fact, only one certainty about it: Now that it threatened to contaminate the worlds of Earth, its source would have to be destroyed -- even though for the native Kappans the Water of Thought was as necessary as the Breath of Life itself.

This was a quick fun read from an author I previously enjoyed greatly (book of swords series). Have an hour or two free and take the plunge into a self contained and nicely complete story. [Rob, Goodreads]

Chapter One
In the dream a faceless figure came pacing after Boris. Clad in a groundsuit, it groped toward him with hands whose fingers writhed like snakes, menacing and venomous.
No, Boris told the figure, it’s not me you want. Those are your hands, not mine. And then he realized that he was waking up.