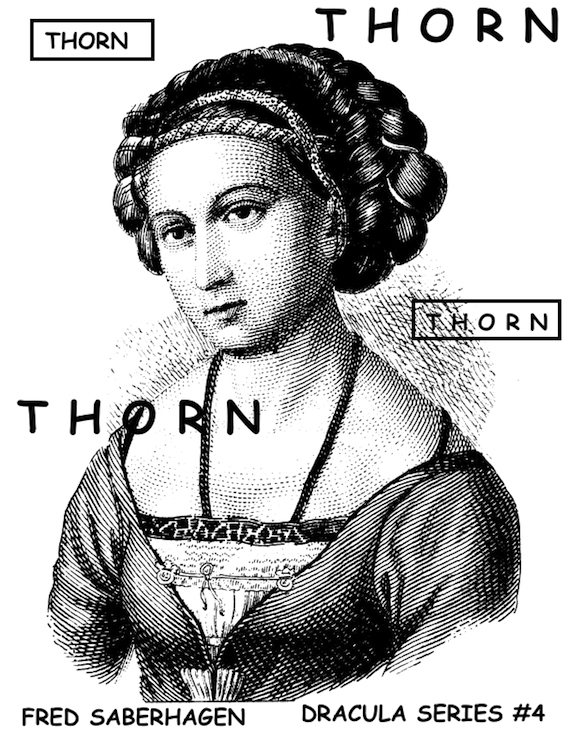 Vlad Tepes, Prince of Wallachia, hunts royal prey--a renegade Princess. Ordered to kill the woman, he tracks her across the continent--but finding her, Dracula loses his heart.

Undead, Vlad Tepes hunts the murderous art thieves who have stolen the portrait of his lost love. But the thieves are after more than art--from the Master Vampire they would steal the very secrets of life--and death!

Mary was no longer there. Her mortal form, or what was left of it, had been blown clear of the vehicle on its far side.

A wolf's teeth closed on her hair, and on what was left of the collar of her shirt. She was dragged away from the fire, to a distance where its flames were no longer hot enough to burn...

Thorn closed his eyes, and willed the double-fang growth in his upper jaw. Then he crouched lower over the girl, bending till his lips touched her charred flesh. In a moment he had tasted of her living blood.

A brief excerpt taken from the Prologue:

The runaway fled gracefully through the smooth white tunnel, her small bare feet moving with quick darting strides. her slight, girlish body, completely naked, was splashed by a quickly shifting disco spectrum of fantastic light that followed her from the room she fled. Music, loud rock music, followed too, throbbing with the light. Like the light, it lost its violence only partially and slowly as it increased its distance from its origin.

As if the music had caught up with her in midstride, the girl's graceful run changed abruptly, halfway through the tunnel, into a dance, but a dance that still carried her rapidly forward into the large, white room at the tunnel's end.

It was a long room, like something out of a museum almost, and the windowless white walls were angled and rectangular. The white carpet was immaculate and thick. On the walls hung many paintings, drawings, prints, and all of them were hard to see in the bewildering, reflected disco rainbow that came through the tunnel to provide the only illumination. There were carvings hanging on the walls too, and statues large and small stood everywhere. The girl's dance moved her in and out among them as if she might be looking for another way out. But the tunnel was the only entrance, and the only exit visible.

The girl's dance was a performance meant for no one but herself. Her face was a lovely mask, utterly unlined, looking very young, and looking too calm to be a dancer's face. Around it, long brown hair swung wild and dark, dirty and uncared for. Her dark eyelids were half closed, the full lips parted levelly over white, slightly uneven teeth. The skin of her body was childishly smooth, and gleamed lightly in the strange changing light, as if she might be sweating despite the coolness of the air. Her feet were tiny and arched, grained here and there with dirt, and she set them precisely and silently down in the thick whiteness of the the floor.

The driving music had less and less to do with the dance as it continued. Its movement shifted to a slower rhythm, becoming almost courtly Then halfway through a pirouette the girl's eyes opened wide. Her balance, perfect through all the movements before this one, abruptly broke, and she went down on one knee on the rich ivory carpet, stunned into awkwardness by something she had seen.

She stared with wide eyes for a long moment into the dimness straight ahead. Then, bare shoulders heaving with a great sighing breath, she slowly turned her head. Hardly did she dare to try to see again what she had seen a moment earlier.

It hung there on the wall, amid the hundred other paintings. Conflicting emotions struggled in the girl's face; and then presently her face became tranquil again, but on a different level. She was gazing outward now, away from self. She stayed crouching there on one knee, almost exactly as she had fallen, becoming almost as motionless as one of the surrounding statues. Now even her breathing appeared to stop.

"There you are." The voice of the approaching man was slurred and gleeful, and it contained hostility. The light coming through the curious white tunnel was modulated by his approaching shadow. He moved into the girl's range of vision now, but she ignored him completely. He was as naked as she was, and looked to be a few years older. Perhaps he was twenty-two or twenty-three. Reddish hair with a tendency to curl fell damply to his muscular and freckled shoulders. He was only a few inches taller than the girl. And he was breathing heavily, as if he too might just have finished a dance or some other physical exertion.