THE THIRD BOOK OF SWORDS 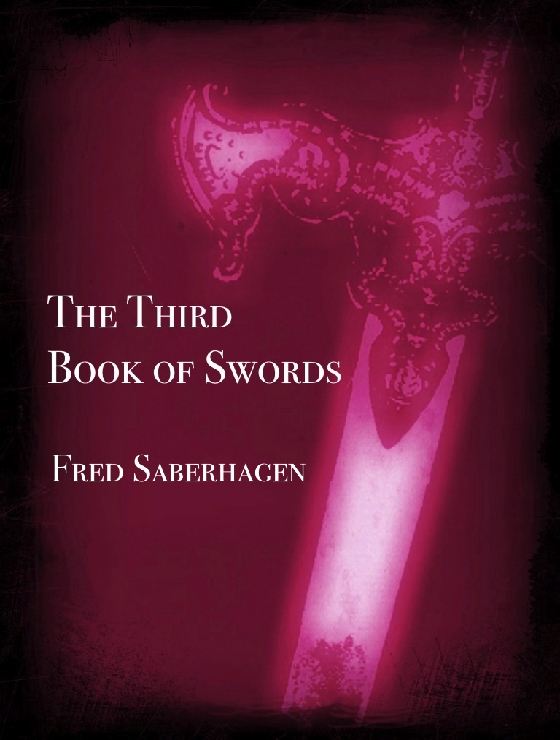 Available from Kindle, Nook and iBook

Hoist with their own petard by setting humans up as pawns in their game of swords, the gods now face their own destruction in the violent, thrilling conclusion to Saberhagen's Swords trilogy. (Booklist)

Jord, the human smith who gave his right arm in the creation of the Swords, reappears here as a courier fighting with rebels opposed to the rule of Yambu, the Silver Queen, and her dangerous ally Vilkata, the dark King. Assigned to deliver two Swords to his masters from the House of Courtenay, Jord is badly wounded in a fight. He collapses after reaching his destination, which serves as a cover for two characters from the previous tales: Ben and barbara. Both had been involved in the robbery of the main treasure horde of the money-grubbing Blue Temple along with Jord's son, Mark, and they quickly realize that their cover has been blown. An even graver danger, however, confronts them and all of the rebel forces. The Dark King now possesses one of the most powerful of the Swords, the Mindsword, and this threat forces the rebels to make an alliance with the Silver Queen. As usual, Saberhagen hypnotizes the reader with his impelling narrative skills. The ending, simultaneously downbeat and uplifting, might throw readers looking for a more traditional approach. This writer rarely takes the conventional route, however, and that alone makes reading this entire trilogy a rewarding experience. N.C. (West Coast Review of Books)

A brief excerpt from chapter one

THE THIRD BOOK OF SWORDS
by Fred Saberhagen

Up at the unpeopled borderland of cloudy heaven, where unending wind drove eternal now between and over high gray rocks, the gods and goddesses were gathering.

In the grayness just before dawn, their tall forms came like smoke out of the gray smoking wind, to take on solidity and detail. Unperturbed by wind or weather, their garments flapping in the shrieking howl of air, they stood upon the rooftop of the world and waited as their numbers grew. Steadily more powers streaked across the sky, bringing reinforcement.

The shortest of the standing figures was taller than humanity, but from the shortest to tallest, all were indisputably of human shape. The dress of most members of the assembly displayed a more than mortal elegance, running to crowns and jewels and snow-white furs; the attire of a few was, by human standards, almost ordinary; that of many was bizarre.

By an unspoken agreement amounting to tradition the deities stood in a rough circle, symbol of a rude equality. It was a mutually enforced equality, meaning only that none of their number was willing to concede pride of place to any other. When graybearded Zeus, a laurel wreath embracing his massive head, moved forward majestically as if after all he intended to occupy the center of the circle, a muttering at once began around him. The sound grew louder, and it did not subside until the Graybearded One, with a frown, had converted his forward movement into a mere circular pacing, that soon brought him back to his old place in the large circle. There he stopped. And only when he stopped did the muttering die down completely.

And still each passing moment the shape of another god or goddess materialized out of the restless air. By now two dozen or more tall forms were in place around the circle. They eyed one another suspiciously, and exchanged cautious nods and signs of greeting. Neighbor to neighbor they muttered in near-whispers through the wind, trading warily in warnings and backbittings about those who were more distant in the circle, or still absent. The more of them that gathered, the more their diversity was evident. They were dark or fair, old-looking or young-looking. Handsome--as gods--or beautiful--as goddesses--or ugly, as only certain gods and goddesses could be.

Twice more Zeus opened his mouth as if he intended to address them all. Twice more he seemed on the verge of stepping forward, taking the center of the circle, and trying to command the meeting. Each time he did so that warning murmur swelled up into the frozen air, through the blasting wind, giving notice that no such attempt was going to be tolerated. Zeus remained silently at his own station in the ring, stamping his feet now and then and scowling his impatience.

At last the individual gossipings around the ring began to fade toward quiet, give way to silent waiting. There was some general agreement, tacitly attained, that now a quorum had been reached. There was no use trying to wait until all the gods and goddesses were here, all of them never attended a meeting at the same time. Never had they been able to agree unanimously on anything at all, not even on a place or an agenda for their arguments.

But now the assembly was large enough.

It was Mars, spear-armed and helmeted, who broke the silence; Mars speaking in a voice that smoldered and rumbled with old anger. The tones of it were like the sounds of displaced boulders rolling down a glacier.

Mars banged his spear upon his shield to get the attention of the assembly. Then he said to them. "There is news now of the Mindsword. The man that other humans call the Dark King has it. He is, of course, going to use it to try to get the whole world into his hands. What effect this will have on our own Game is something that we must evaluate for ourselves, each according to his or her own position.

It was not this news he had just announced to the assembly that was really angering Mars. Rather it was something else, something that he wanted to keep secret in his own thoughts, that made him almost choke on rage. Mars did not conceal his feelings well. As he finished speaking he used a savage gesture, a blow that almost split the air, simply to signify the fact that he was ready now to relinquish the floor to someone else.

Next to speak was Vulcan--Vulcan the Smith with the twisted leg, the armorer and Sword-forger to the gods.

"I am sorry," began Vulcan, slyly, "that my so-worthy colleague is unable to continue at the moment. Perhaps he is brooding too much about a certain setback--one might even call it a defeat--that he suffered at the hands -- or should one say the paws -- of a certain mortal opponent, some eight or nine years past?"

The response of Mars to this was more sullen, angry rumbling. There also was a murmuring around the circle, some of it laughter at Mars, some a denunciation of Vulcan for this obvious attempt to start an argument.

Aphrodite asked softly, "Is this what we have come here for, to have another quarrel?" Her tall body, all curves, all essence of the female, was wrapped in nothing but a diaphanous veil that seemed always on the verge of blowing away in the fierce wind but never did. She like the other deities was perfectly indifferent to the arctic cold.

Near her, Apollo's taller form appeared emphasized for a moment in a lone ray of light from the newly risen sun. The Sun's bright lance steadily pierced the scudding clouds for just as long as it took the god to speak, and held his body in its light. Apollo demanded, "I take it that we are all agreed upon one thing at least?"

Someone else was cooperative enough to ask Apollo: "What?"

The tall god replied, "That Hermes has not come back from his mission to gather up the Swords again. That he is never going to come back."

"That's two things." another member of the group objected.

Apollo took no notice of such carping. "That our divine Messenger, who no doubt thought himself as secure in his immortality as most of us still think we are in ours, has now been for four years dead . "