THE SECOND BOOK OF SWORDS 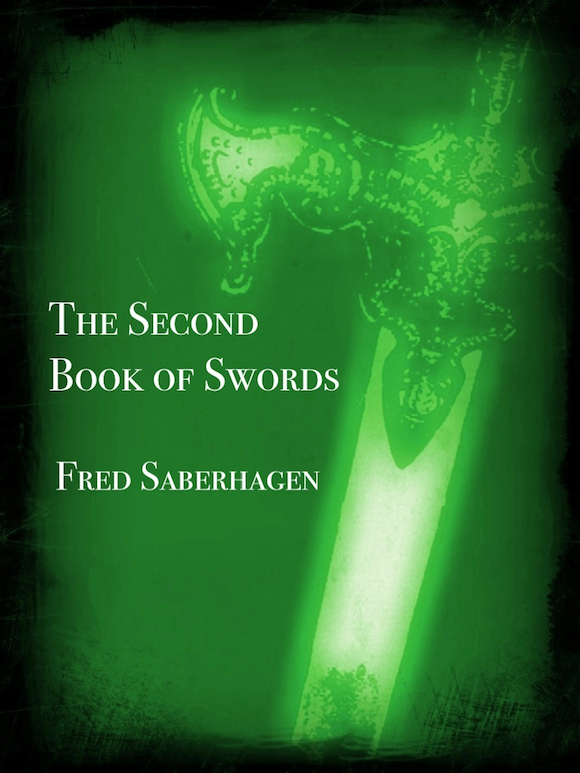 Available in e-format from Kindle, Nook, and iBook.


THE SECOND BOOK OF SWORDS
by Fred Saberhagen

For a game the gods have given the world twelve Swords of Power so that they might be amused as the nations go to war for possession of them. But Vulcan Swordmaker has had his little joke: the Swords can kill the gods themselves. What started out as Divine Jest has become all too serious. Now the gods want their swords back--but even gods must tread most carefully when faced with the Swords of Power.--From Cover blurb.

A brief excerpt from Chapter One

THE SECOND BOOK OF SWORDS
by Fred Saberhagen

Fire from the sky came thrusting down, a dazzling crooked spear of white light that lived for an instant only, long enough to splinter a lone tree at the jutting edge of the seaside cliff. The impact beneath the howling darkness of the sky stunned eyes and ears alike. Ben winced away from the blinding flash--too late, of course, to do his shocked eyes any good--and turned his gaze downward, trying to see the path again, to find secure places to put down his sandaled feet. In night and wind and rain it was hard to judge how far away the stroke had fallen, but he could hope that the next one would be farther off.

Ben's thick and powerful right arm was stretched forward across the rump of one heavily burdened loadbeast, his hand grasping the rope that bound the panniers on the animal's back. Meanwhile his left hand extended backward, tugged hard on the reins of the loadbeast reluctantly following.

The little packtrain was composed of six loadbeasts along with the six men who drove and led and cursed the animals forward. A seventh animal, considerably more sleek and graceful than the six that carried cargo, came a few meters behind the train. It bore a seventh man, a cloaked and hooded figure who rode with a cold, flameless Old World torch raised in his right hand. The torch shed an unflickering light through wind and rain, projecting some of its rays far enough ahead to give the train's drivers some hope of seeing where they were going.

Like some odd crawling compound creature possessing three dozen unsynchronized feet, the pack train groped and struggled its way forward, following a mere sketch of a path across the wild landscape. Ben was pushing the first animal forward, more or less dragging the second after him, and trying to soothe them both. Hours ago, at the beginning of the trip, the drivers had been warned that tonight the usually phlegmatic animals were likely to become skittish.

There would be dragon-scent about, the officer had said.

Another flash of lightning now, fortunately not quite as close as the last one. For just an instant the rocky and forsaken wilderness surrounding the small train was plain to see, including the next few meters of the path ahead. Then darkness closed in deeper than ever bringing with it harder rain. Its parts linked by the push and pull of human arms, the beast with three dozen feet advanced, making slow progress over the treacherous footing of rain-slicked rocks and yielding sand. Meanwhile the wind howled continuously and the rain assaulted everything.

Ahead of Ben, the soldier leading the first loadbeast was wrapped and plastered like Ben himself in a soggy blue-gold uniform cloak, with a useless helmet drizzling rain into his eyes. Now Ben could hear him loudly calling down the doom of demons and the wrath of gods upon this whole situation--including the high functionaries whose idea it must have been, and who were no doubt somewhere warm and dry themselves this moment. The man was almost shouting, having no fear that the priest-officer, Radulescu, who rode behind the train, might be able to hear him above the wind.

The cold torchlight from behind suggested, and the next flash of lightning proved, that the scanty path the train was following was now about to veer sharply to the left. At the same time, a large indentation in the line of the nearby cliffs brought their potentially fatal edge sweeping in sharply toward the path from that direction. Ben, not liking this sudden proximity of the brink, leaned harder against the animal whose rump his right arm was embracing. Using his great strength and his considerable weight, he forced the beast a little farther to the right. Now the packtrain was moving so close to the cliff's edge that when the lightning flashed again it was possible to look down and glimpse the pounding sea. Ben thought those rock-torn waves might be a hundred meters below.

He supposed that a common soldier's life in any army was not a happy one. More than one old proverb, repeated mostly among soldiers themselves, testified to that, and Ben had been given plenty of chance to learn the truth of the proverbs for himself. But what worried him tonight was not the usual soldier's concerns of dull abuse and passing danger. Not the storm. Not really the danger of falling off this cliff--that risk was obvious and could be avoided. Nor was it even fear of the guardian dragon up ahead, whose presence the drivers had been warned of because it might make the loadbeasts nervous.

What bothered Ben was a certain realization that had been growing upon him. If it was correct, that he had more than dragons to worry about. So, for that matter, did the other drivers who were here tonight; but Ben had no reason to think that any of them had yet realized the fact.