A QUESTION OF TIME 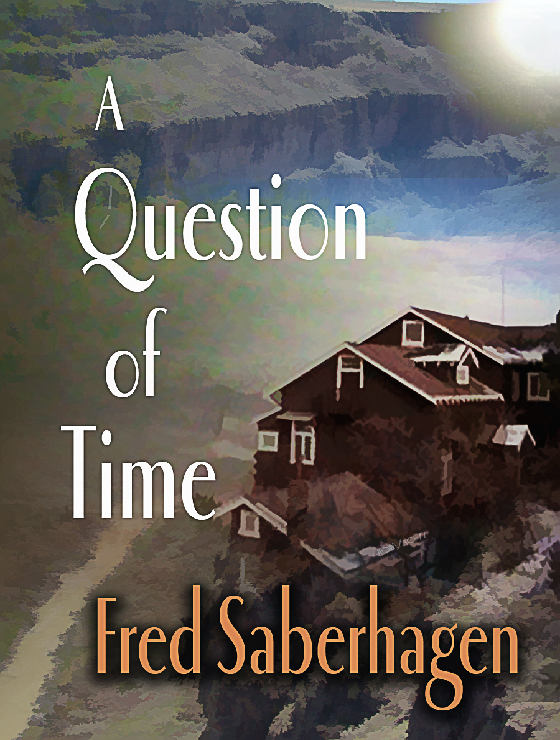 He was once called DRACULA but in our day he is known by many strange names . . .

In 1935, Conservation Corps worker Jake Rezner meets a beautiful and mysterious young girl in the Grand Canyon. She leads him deep into the rocks, to a bizarre sculptor named Edgar Tyrell. Soon Jake finds himself lost in time, unable to return.

Almost 60 years later private detective Joe Keogh has been hired to locate a missing girl--the great niece of Edgar Tyrell. But Tyrell is nosferatu, and he would sculpt in the sands of reality itself. So Keogh must call on Mr. Strangeways, An Old Friend of the Family and Lord of the Vampires, to battle an undead menace from beyond time!

The dust-covered figure suddenly turned his gaze on Camilla, and rasped a comment. "So, you've caught another one."

She answered timidly. "Don't say that, Edgar. He's a friend of mine."

"Oh, I don't doubt that. Most men would be delighted to be your friend. But have you told him yet?"

Camilla looking from one man to the other, seemed to be afraid to say anything more.

"Told me what?" Jake demanded.

Suddenly Edgar caught sight of the lunch box, which Camilla had put down on a ledge of rock. With some muttering that sounded vaguely llike a curse, he snatched up the little container at the same time raising his other hand as if he were about to strike the girl.

Jake, starting to shout something angry, took a step forward. But Camilla cowering back from the blow that never fell, yelled at Jake to stop. It was a scream of such sudden heartfelt terror that he unthinkingly obeyed.

Then he looked back at Edgar. "Told me what?" he reapeated, harshly.

"Nothing of real importance." Wicked eyes gleamed at him out of the old man's dusty face. "Just that, today, the silly business that you have called your life is over."

Review: A QUESTION OF TIME is one of the most unpredictable vampire novels to appear in recent years: it blends a science fiction time-slip novel with an account of two very different breeds of vampire, melding these backgrounds with the story of a vanished young woman and the family who pays detectives to discover her whereabouts. [BOOKWATCH, the official newsletter of The Midwest Book Review]
A brief excerpt taken from Chapter One

Jake Rezner had never owned a watch, but the lack had rarely worried him, and he didn't mean to let it bother him today. Squinting up at the first direct rays of the morning sun, just coming clear of an eastern cliff, he thought that today the sun would let him tell time well enough. He might get back to camp too late for evening chow, but that wouldn't really matter. All he really had to worry about today was getting back before it got too dark to walk the Canyon trails. If he should get caught out overnight, or was so late returning that the camp authorities started to organize a search for him, they might begin to be uncomfortably curious about where he'd been.

For Jake the seven days since last Sunday had dragged almost as if he were in prison, or as if there could be something wrong with all the clocks and watches in the camp, and with the calendar that had spent this week, like every other week, hanging on a pole in the orderly tent.

Anyway, Sunday had at last come round again, and right after morning chow Jake had got hold of a canteen and come down here to the creek to fill it. At the moment he was squatting on the rocky lip of Bright Angel Creek, his right hand holding the two-quart vessel under water, air bubbles coming up in a way that made it look like he might be drowning a small animal. The canteen was surplus military equipment, like Jake's khaki clothes, like his sturdy boots and his round-brimmed fatigue hat, all on loan from the army to help the Civilian Conservation Corps get going in these dark days of the Depression.

Early June sunlight, hot but not nearly as hot as it was going to be in a few hours, sparkled off the surface of the noisy creek, glinting in the small patches where the water wasn't too chopped up by turbulence to be anything but white froth. The dazzle of sunlight on rushing water suggested moving pictures, and was the kind of thing that on a dull Sunday might have tempted Jake to sit here for an hour and just watch--but today, whatever happened, was not going to be dull. Not for him.

Small rapids, both upstream and downstream, generated unending hollow noises that sounded to Jake like a murmuring of many voices. In camp you could hear the rapids of the creek all day and all night, and on workdays along one trail or another they were sometimes audible. Since coming west to work for the CCC Jake had discovered that he could never listen for long to the voices of this or any other creek before they started making words. Right now the rapids upstream were louder than those below; and that seemed only natural, because the water upstream had just come tumbling all the way down from the source up on the North Rim, a mile higher and maybe ten crow-flight miles from this spot. Downstream from Jake, not more than fifty yards away, Bright Angel Creek plunged in a final subdued roar to its union with the wide, swift, silent Colorado at the very bottom of the Grand Canyon.

All the rapids in the creek kept on shouting their imaginary words at Jake, but right now they sounded like people arguing in some foreign language. Only one of those words was at all clear. It was a certain name, a girl's name that he'd learned only two weeks ago.