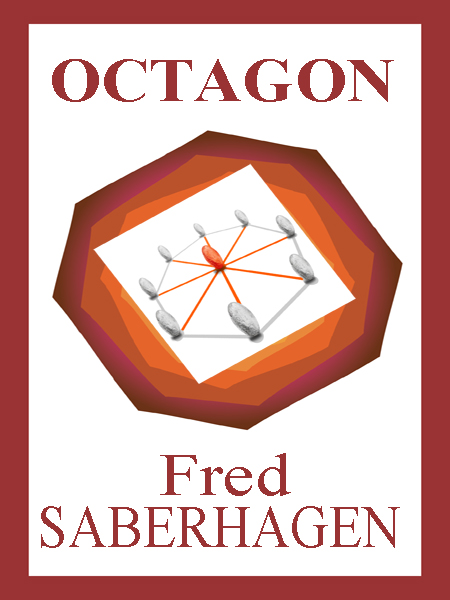 Available as an e-book from Kindle, Nook, iTunes, Kobo

Nobody who paid their fees and took roles in the mail-order Starweb adventure had ever had the slightest reason to suspect that they were letting themselves in for anything other than some harmless escapism, fighting imaginary battles on the immaterial killing-ground of a computer's memory banks.

Then they began to die.

Alex Barrow finds himself a not entirely willing participant in this grisly shadow-war, drafted into it by his uncle, Bob Gregory, perhaps the only man who has any idea what is happening. But Robert Gregory cannot reveal his suspicions to anyone -- because if he is right, the he is the murderer . . .

Octagon is a clever SF whodunnit. Players of a mail-order computer game are mysteriously dying. The culprit's identity is soon apparent, but that doesn't spoil the fun. [Manchester Evening News]

Or maybe the Mad Scientist.

Not a Berserker, Carl Tartaglia told himself thoughtfully. For him there was something repulsive in that dark concept, even if it was all in fun, only a game.

The Artifact Collector, maybe? But it seemed to him, novice that he was, that winning the game with that character type would be very difficult; a successful character needed some type of extra ability, which the Collector just didn’t have. But maybe the time after next—Tartaglia already liked the game so well that he was sure he was going to play again and again—he’d try being a Collector, just to see what it was like.

This game he was in right now was twenty turns along with no end in sight, and it was Tartaglia’s first experience with Starweb, and he was having a ball, being an Empire Builder, which other players had told him was a good choice for beginners. The EB gained points simply by owning worlds and factories and population units. It had seemed to Tartaglia after a determined study of the rules, that the Empire Builder must be one of the most likely character types to win. In fact the only thing that bothered him at all about Empire-Building was that maybe it was just a shade too much like selling housewares, a neat and orderly way to make a modest income, and God knew he got enough of that eight hours a day anyway. That was why Tartaglia hadn’t even considered taking the Merchant character in the game.