THE MASK OF THE SUN 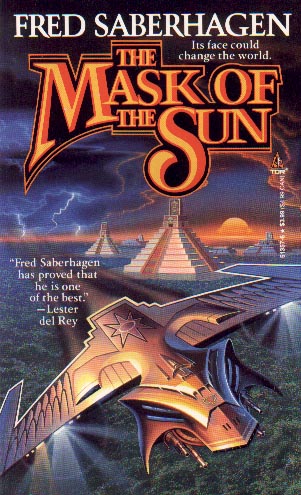 When Mike Gabrieli's neer'do'well brother Tom disappears shortly after discovering a fabulously valuable Aztec relic, Mike rightly suspects that this time the family's black sheep has got himself into the kind of trouble from which even Mike won't be able to extricate him. But still, Tim is -- or was -- his brother, and Mike must do what he can.

For Mike this is the beginning of an adventure beyond imagining, an adventure that will put him in constant peril of his life as he shuttles between past, present and future of an alternate reality, fighting beside the descendants of the Incas as they battle to erase Pizarro's bloody footprints from the New World, and secure the reality of their own existence.

But is the "alternate reality" really an alternate, or is Mike actually struggling to erase the very future that gave him birth? The answer lies in the source of all his troubles and his only hope of survival: THE MASK OF THE SUN [Ace cover blurb]

It is an ancient Aztec mask, worth a fortune in gold, but it holds more power than the human mind can comprehend. Tom Gabrieli has dredged it from the sea and vanished. Mike Gabrieli dared to wear it and his life will never be the same. Suddenly he is the focal point of an inconceivable war between time-traveling Tenokas and 16th century Incas. But more than his life is at stake; the total dissolution of history as we know it will be the price for his failure. The key to victory is an unimaginably awesome weapon from the future, and the only man who can defeat Mike Gabrieli also wears THE MASK OF THE SUN. [TOR cover blurb]

One of the characters in this story says ". . . don't worry if you don't understand it all. Like trying to make common sense out of the theory of relativity." Truer words were never spoken. The reader follows the main characters rapidly from 20th to 16th to 23rd centuries, passing through several "branches" of history as well as time slots. Most of the action takes place in a restricted geographical area known today as Peru. Mike Gabrieli, of the 20th century, dares to wear a solid gold mask his borther has found in the sea. It shows him the immediate future and leads him safely through it to 16th-century Peru at the time of Pizarro who, by the way, has an identical mask that enables him to destroy the Incas and to establish Spanish dominion (in one branch of hisotry). Mike, appalled by the viciousness and greed of the Spaniards, uses his mask in an attempt to defeat Pizarro and save the Incan Empire. (That is another branch of history.) [Kliat]

This is an exciting book, especially for anyone interested in history. There is a great deal about historical 16th-century Peru as well as highly imaginative alternatives. Saberhagen always provides a good adventure story, and this one might send young adults to history books.[ S.A.L.]

Among other things, a story of Greed - individual and institutional.


Today was not the day to change his routine, and Tom went as usual to the book-and-record store, in the new shopping center, where for a couple of months now he had been working evenings as a clerk. He would call Mike, he thought. After work tonight ...
Business was slow. The Chevrolet crowd of summer tourists didn’t buy as much as the Cadillac people who came in winter, so he had time this evening to sit behind his counter and think. The break was welcome. From a display table he picked up a gift volume, Central American Art. It proved to be full of beautiful color plates, though short on the hard information he was seeking.
He felt sure the mask was Indian—pre-Columbian—though he wasn’t an expert and couldn’t begin to pin it down any closer than that without help. He wanted to identify it before he went to anyone. If he didn’t sound stupid, they wouldn’t try to cheat him so badly. Tomorrow he would try the library.
... Jesus, it had been weird. In the background, red daggers and a great golden disc. Up front, apparently right in the boat, Mike, holding a phone, plain as day. Certainly Mike, though near as Tom could remember, the face had looked sort of like a drawing rather than an image from memory. Some psychologist could explain it, sure. But meanwhile he wasn’t going to put that thing on again—
The shop’s door chime signaled a customer. Tom looked up at the approaching white-haired man, whose face might be taken for young or old—a strange face that would be hard to forget.
Tom had never met the man before. But he had seen him. Just today.