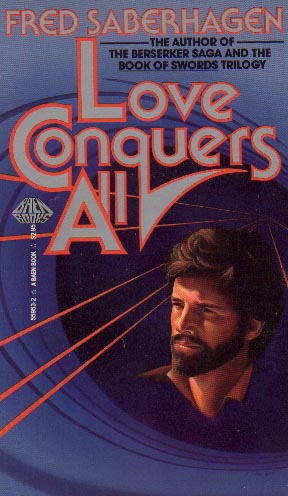 THE WORLD TURNED UPSIDE DOWN

YOU HAVE:
Sexual Freedom: There are no limits on where, why, when, how or with whom. The only dirty word is "No."
Freedom from Want: Zero Population Growth has been achieved and at last the world's resources have caught up with demand.

BUT YOU PAY A PRICE. Decency is a social offense, and the Right to Life of the unborn is zero -- even its mother cannot protect an "unauthorized fetus."

IS IT WORTH IT? Or is rampant, coercive liberalism the worst tyranny of all?

In the tradition of Brave New World and 1984, LOVE CONQUERS ALL is a realistic assessment of certain trends in our society taken to their logical conclusions: the result is a scathing science fictional indictment of our generation's most cherished shibboleths. This is iconoclasm in the grand style!

Now, what about this sleeping arm that weighed so gently on his breathing? Ah, yes. Her name was Marjorie. She too was a newcomer to Chicago, looking for a job; last night the desk clerk at the Y had assigned them to the same room. Behind the front desk was a big sign reading PURE THOUGHTS ARE THE MARK OF A DIRTY MIND. And they weren't trying to be funny either; they were really that old-fashioned here. They had a strict rule requiring at least two people in every bed....

A brief excerpt from CHAPTER ONE