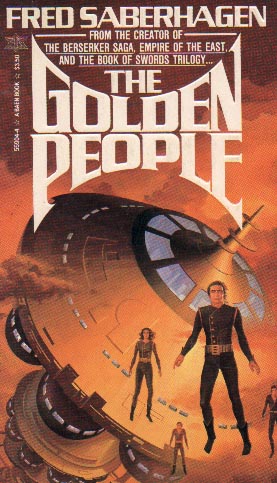 The Road To Hell Is Paved With Good Inventions . . .

Emiliano Nowell was a world-class genetic engineer. He was also a wealthy and idealistic man with the time and money necessary to follow his dreams. In secret laboratories far from Earth he used his powers to create one hundred genetically perfect children . . . an enlightened cadre Nowell hoped would lead humanity out of that maze of war, famine, torture and death called History.

But the Golden People proved to be more intelligent than even he believed possible. Among other frighteningly advanced talents, they had the power to mentally influence normal humans. Now, one of them has become the group's secret leader. His goal is not to help humanity -- but to replace it.

Though best known for the Berserker series of space operas written early in his career, Saberhagen's first novel was The Golden People, published in 1964. Twenty years later, reworked, and expanded, it is still the straightforward, old-fashioned SF that made his reputation. Space explorer Adam Mann is on the first expedition to the planet Golden, the only one Earth has found with intelligent life. Its natives are primitive, but the planet is enveloped in an impregnable force field that renders all high technology inoperable. The puzzle provokes the genetically engineered Jovians (of which Adam learns he is one), who consider the field-builders a challenge to their own superiority and psi powers. [Publishers Weekly]

An excerpt from Chapter One:

Fourteen-year-old Ray Kedro was backed up against one of the mural-painted walls in the Middle Boys’ recreation yard doing what he could to defend himself, when twelve-year-old Adam Mann first saw him. Adam glanced up from the electronic pages of Space Force Adventures, and watched for a few moments with a playground veteran’s indifference. Then he realized that the six kids facing Ray had more in mind than the routine taunting and roughing that they were likely to hand out to any newcomer. This time some of the guys were really hot about something.
Most of the angry bunch were a year or two older than Adam, and all but one of them were taller. But he was widely respected on this territory. He folded the comic book, the electronic pictures on the thin plastic pages darkening into lifelessness as he did so, and stuffed it into his pocket. Moving in the slightly swaggering gait that he had recently developed to what he considered near-perfection, he walked toward the group.
“What goes on?” Adam demanded. He had dark eyes that were often, as now, belligerent, medium brown hair with a slight curl in it, and a nose that had not been broken—not yet at least—but looked as if it might have been.
“He’s a snooper.” Big tough Pete swung out a long arm and slapped the new kid again. “He can read your mind. He’s gonna be singin’ for the bosses here—”
“I’m not!” The new kid was tall for the age-group of this yard, but thin, with incongruously good clothes that were dusty and rumpled now from his being pushed around. Mussed blond hair fell over blue eyes that looked scared but still didn’t blink at being slapped. He had a handsome face, almost delicate, and bleeding now a little along one cheekbone and from the nose. But he didn’t look to Adam like a sissy, only like a guy who couldn’t understand what it was all about.
“He made them dice move!” another guy standing beside Big Pete put in. The tone made it a deadly accusation.
“You wanted me to play with dice!” the new kid shouted back at them. To Adam he still looked more angry than afraid. “I had to show you first what I can do. If I play dice with you, you’ll have to trust me—”
“Play dice, play dice!” Pete mimicked, in a changing, cracking voice. Whenever Pete’s voice betrayed him in that way, making him sound funny, he got mad, and now it made him madder than ever. “You goddam fairy!”
The guys were all yelling and waving fists. Adam was suddenly scared, in a cold, clear way. Not so much afraid of getting hurt, but that these guys he knew could get so wild over something like this. Some stupid nonsense that didn’t matter. It didn’t sound like the new guy had really done them any harm.
Adam was beginning to understand, vaguely, or he thought he was. There were, there had always been, a few people in the world who could move dice in more subtle ways than with their fingers, move dice or other small objects using their minds alone. The same people, or others with unusual mental powers, could perform other tricks, equally unsettling. Parapsych talents, the books in the Home library called such abilities. Up until only a few years ago hardly any scientists had believed that such things existed. And Adam had never to his knowledge met any of the rare folk who were so gifted.
The little mob was surging forward, bent on destruction. On impulse, Adam shoved his own strong and stocky body in front of the new kid, and knocked down big Pete’s upraised arm. “Let ’im alone!”
Big Pete halted, gaping. “Why?”
“Because I say so!”
Pete gave an angry grunt, and swung. Adam’s reflexes and timing were already superb; his head moved safely out of harm’s way, and his own right fist was already in a good position to hit back. He got enough weight behind his counterpunch to flatten Big Pete’s nose.
Furious and clumsy, the little mob closed in on Adam and the new kid. Something hit Adam, hard, on the side of his head. In a daze, he found himself flat on his back on the playground’s genegineered grass, looking up at a ring of faces filled with hate and excitement. In a way, though he knew better, it seemed to Adam that they were all playacting, they couldn’t be serious about this great stupidity they were engaged in. A part of his mind kept wanting to laugh at the foolishness of it all, even while he kicked and struck up at the lowering faces, and feet kicked back at him.
Then the recreation yard monitors came, running and shouting threats, from wherever they had been goofing off. They were older teenagers, full of strength and energy once they got started, and they arrived just in time to break up the fight before anyone was killed or crippled.