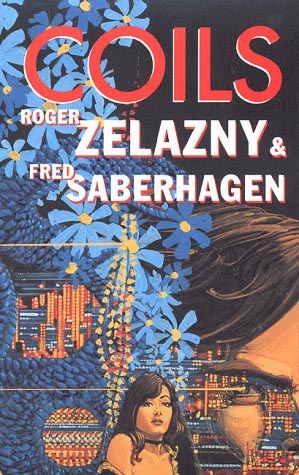 
The Ultimate mind game, leading through a maze of espionage, corruption and terror.

Donald Belpatri must unlock the secret sins of his past. His beautiful young lover has been kidnapped, and only by journeying back through the mists of memory and into waking nightmare can he save her. He will have to rediscover the extraordinary and dangerous power he possesses . . . the power to cross over the interface between mind and computer.

Years ago, the Angra Energy Corporation exploited Belpatri, using his powers to satisfy their greed. Now, Angra Energy wants him back, and they'll hold his woman hostage until they have their man. But this time Donald is determined to fight Angra––and win. Once again voyaging down through the spirals of mind into the coils of computer consciousness, he will meet the enemy on the battleground of his brain.

All the elemental forces of body and mind clash as Belpatri wages war on two fronts––facing the violence of Angra's merciless hitmen and the shattering, unknown impulses of the computer's dark infinities.

Review: The splendidly named Zelazny and Saberhagen get together on a fantasy which proves a much more successful exercise in collaboration that the recent Stephen King and Peter Straub effort, 'The Talisman'. Plot concerns a man whose mind can coil into the memory bank of any computer. Style is John D. Macdonald filtered through Michael Crichton. Recommended. [Time Out]
INTRODUCTION to COILS


Don BelPatris knows that his hometown will have changed in the years he's been away. But in the hamlet of Baghdad, Michigan, the changes are too great. Even the main street is not the main street he recalls. Where is the red brick school? And the church and the movie theater have disappeared. The existing houses—all totally unfamiliar to Don—are old, too old to have been constructed during his absence. When Cora, his lover, asks if there couldn't be two towns with the same name, Don denies it. "No. What I remember fits, right to the edge of town. Then... it's as if something else has been—grafted in."
Back on his houseboat in the Florida Keys, Cora, disturbed by the incident, begins to connect it to other voids she perceives in Don's life. The mysterious benefactor whose check is deposited in Don's bank account every month. The scars of unknown origin along Don's hairline. And Don himself begins to wonder at the odd fragments and contradictory memories that now leap unbidden into his mind.
Someone, the psychiatrist announces, has done quite a job on Don. His mind shows evidence of tampering—severe brainwashing, previous hypnosis, and the implantation of false memories. Government intervention, perhaps—but such victims usually don't continue life with such happy prosperity as Don has.
But happy prosperity quickly becomes a part of Don's past. The psychiatrist is found dead of a heart attack. And just as Don's true memories are beginning to break through—snatches of remembered employment at Angra Energy, a huge conglomerate, and a dream about a door, marked COILS DEPARTMENT, to a room containing computer equipment—he discovers a Dear John letter from Cora.
However, Don is convinced that the note is forged. Enraged and desperate, he vows to free Cora from the powerful conspiracy which has kidnapped her, and to retrieve his own past. And growing within him is his rediscovery of a strong psychic bond to computers—a mental power over them. Seizing the opportunity this offers, he follows the monetary impulses from the funds deposited in his bank to a stockpile of the most potent data known to humanity.
But though his determination is strong and his psionic power considerable, together they may not be sufficient to extricate Don—and Cora—from the forces that control their lives.