THE BOOKS OF THE GODS 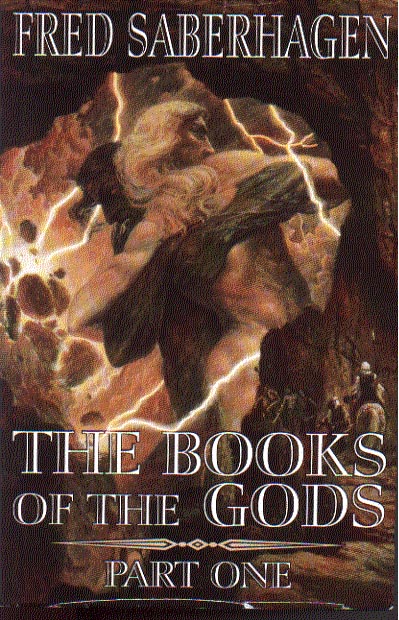 With THE BOOKS OF THE GODS, the best selling author of THE COMPLETE BOOK OF SWORDS and the LOST SWORDS series turns his prodigious talents to age-old mythology, putting a surprise twist on three classic tales.

Centuries ago, it seemed the gods had disappeared from the world. But now, suddenly, they're back -- the sun god Apollo; Hades, Lord of darkness; Thanatos, the personification of death, the enigmatic Trickster; Hephaestus the Fire-Worker and others -- at large among mankind thanks to mysterious masks that merge with the mortals who put them on.

When he presses the FACE OF APOLLO to his head, orphaned peasant boy Jeremy Redthorn becomes the host for the Lord of Light himself. Apollo's avatar had been destroyed in a titanic battle with his mortal enemy, Hades, and all that was left of him was the translucent shard of his Face. It fell to Sal, a warrior in the god's human army, to deliver the Face to a worthy new host. But before she could tell Jeremy what her secret treasure really was, she, too, was killed. Vowing not to fail her, Jeremy continues Sal's quest, even after the object in his care dissolves into his flesh, giving him unimaginable knowledge and setting him on an adventure from which there is no turning back . . .

Long before he absorbed the Face of Dionysus, god of debauchery and madness, Alex, a soldier in King Minos' army, fell into ARIADNE'S WEB. Ariadne, the king's daughter, had fallen in love with Theseus, a young man sentenced to be sacrificed to the Minotaur. Determined to save him from that grisly fate, she enlisted Alex's help, only to find that Theseus wasn't at all what he seemed. With mythical beasts and dark gods confronting them at every turn, Ariadne and Alex must negotiate a maze of events as tangled as they are dangerous.

Only THE ARMS OF HERCULES could have tackled the miraculous tasks legend attributed to him. But now the half-mortal son of Zeus tells us his version of the Twelve Labors, setting the record straight on everything from slaying the nine-headed Hydra to seizing the girdle of the Amazon Queen to stealing the Golden Apples of the Hesperides. Befriended by the Lord of Light, besieged by the God of Death, Hercules travels from the heights of Olympus to the depths of hell itself in adventures that will shake the very foundations of heaven and earth.

THE BOOKS OF THE GODS: PART ONE
by Fred Saberhagen

THE BOOKS OF THE GODS: PART ONE
by Fred Saberhagen

See the link for the individual books comprising this collection.

FACE OF APOLLO
ARIADNE'S WEB
THE ARMS OF HERCULES