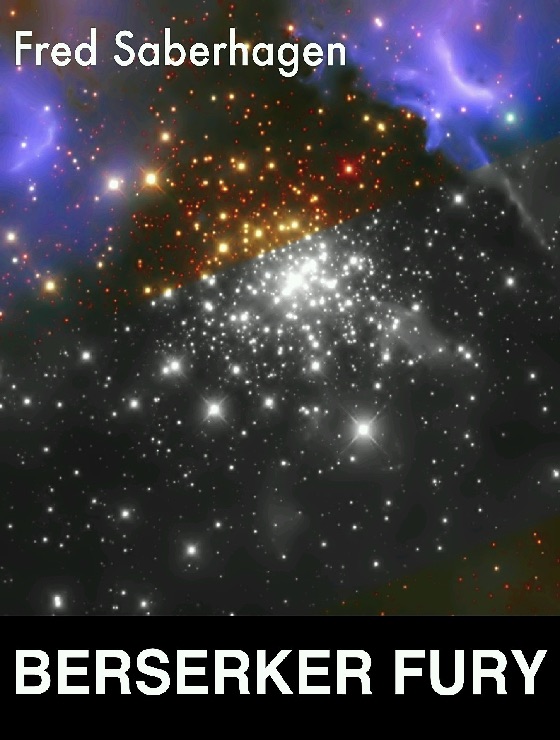 Available as an e-book from Kindle, Nook, iTunes, Kobo

Before George Lucas's Death Star, before Star Trek's Doomsday Machine, came the Berserkers: intelligent, space-faring killing machines whose sole purpose is to destroy all life. BERSERKER FURY is the latest in Fred Saberhagen's thrilling series, where mankind is pitted against the relentless machine organisms bend on destruction.

The Berserkers have developed a new trick: Berserker units that can pass for human-created androids. They're gambling on the advantage this gives them, and massing for an all-out attack on human-held space. But the humans have developed a trick of their own: they've cracked the Berserkers' basic codes and know what their battle plans are:

Both sides are betting everything they have. For one of them, it will be the beginning of the end.

The deadly struggle between the human Solarians and the berserkers, robot war machines dedicated to the extermination of organic life, continues in this disappointing entry in Saberhagen’s far-future saga of interstellar warfare(Berserker Kill, ect). Saberhagen interweaves several plot lines here: the cowardice, attempted treason and eventual redemption of Spacer Nifty Gift; the adventures of photographer Jory Yokosuka as she sees combat and uncovers berserker spies; the quest of Spacer Traskeluk, using the exotic weapons built into his body, to wreak vengeance upon Gift; a climactic space battle of human vs. berserker over outpost Fifty-Fifty, which reads like the Battle of Midway transferred directly, even simplistically, into outer space. The Berserker saga, now more than 30 years old, created one of the seminal concepts of military SF; . . .

One smashing impact after another buffeted the little spy ship, the blasts coming so fast some overlapped. Wave-fronts of radiation hurled by weapon explosions smote like atmospheric shock waves against sagging defensive fields and melting armor. A few minutes ago, under the first probing phase of the attack, the ship had quickly lost its disguise, revealing its egg-shaped Solarian hull to the optelectronic senses of the killer, the berserker computer that was directing the attack from a thousand kilometers away. Ever since that moment of discovery the onslaught of beams and missiles had come on furiously and without pause, as if the berserker were enraged and triumphant. As if a computer could feel those emotions, on having exposed the ship's deception, ferreting out a Solarian artifact inhabited by badlife.

The goal of each and every berserker's basic programming was the destruction of all life in the Galaxy--with a special effort directed against badlife, defined as those organic units that actively resisted their own annihilation, the fate ordained for them by the berserkers' programming.

During the thousands of years in which this program of sterilization had been in progress, Solarian humans had turned out to be the worst badlife of all. And sometime in the early stages of that age-old project, at an epoch when humans on Earth were dwelling in caves and wielding spears and clubs against their enemies, the berserkers had eliminated their own organic creators.