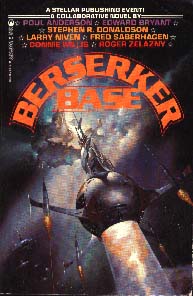 Created in an ancient war, implacable machines programmed to destroy all life, they seem invincible. But now humanity has come to a berserker base; Lars, a prisoner of war who will not surrender; the crew of ASTER'S HOPE, peaceful explorers who must now learn to fight; and Holt and Morgan, who will use the alien skills of the primitive 'Reen to face the planet killers.

BERSERKER BASE
A brief excerpt taken from PRISONERS' BASE

In the beginning, in his first minutes of being held captive by the damned machine, Lars Kanakuru had cursed its metallic guts for keeping him alive. The damned berserker machine ignored his curses, though he was sure it heard them, even as it had seemed to ignore the missile he had launched at it from his small oneseater spacecraft. Lars never saw what happened to the missile. But he had seen on his instruments how the damned berserker had extended forcefield arms, reaching out many kilometers for his little ship, and he saw and felt how it pulled him into the embrace of death.

Not to quick death. He was not going to be that lucky. Suicide attacks by fanatical humans were perhaps not unknown in this berserker machine's experience, but they must be at least sufficiently rare for it to find their perpetrators interesting. It had evidently decided that he ought to be studied.

Lars had no sidearm with him in the tiny cabin of his oneseater, nothing that he could use to quickly kill himself. And before he could use the materials on hand to improvise a way to do the job, some kind of gas was being injected into the cabin of his fighter, hissing into his breathing air, and he lost consciousness. . .