A MATTER OF TASTE 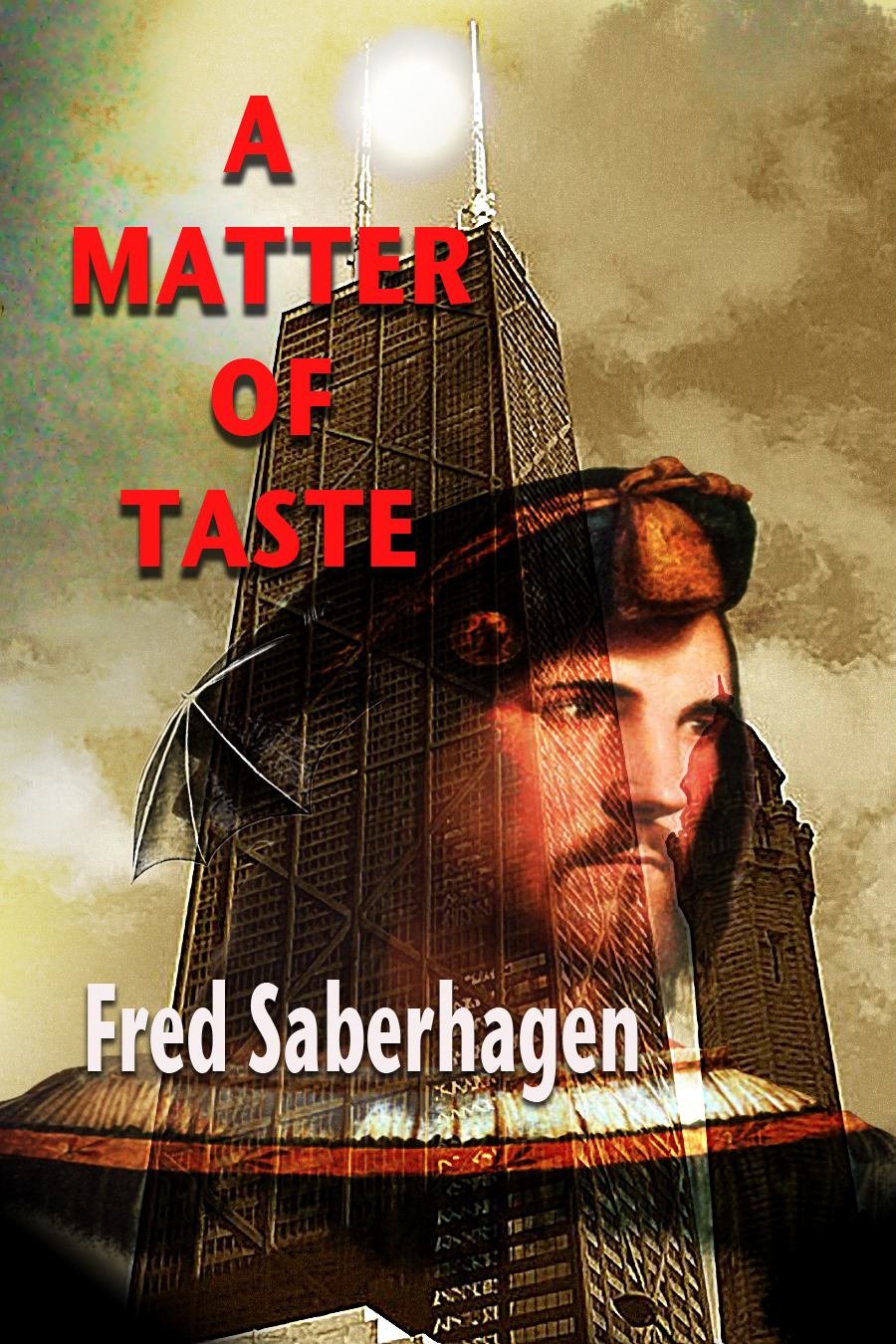 In Chicago, in our day, he is known as Matthew Maule -- but that is merely the latest of a long string of names he has carried. John Southerland, like the rest of the Southerland family, calls him Uncle Matthew. After all he's an Old Friend of the Family.

Meeting "Uncle Matthew" Angelia Roban is a little overwhelmed. Her fiance's descriptions haven't prepared her for this handsome, vigorous, charming man who appears no older than forty. She's bemused when he eats nothing during their "get acquainted" dinner, though John has told her that Uncle Matthew often follows one fad diet or another, and further bemused by his flirtation with a redheaded waitress, who later joins the family in Uncle Matthew's apartment.

The next morning, the redhead has fled, a pair of bloody sores on her neck. John and Angie find Matthew lying in bed , apparently comatose, but John won't call a doctor. He summons, instead, his brother-in-law, Joe Keogh, an ex-cop.

Angie begins to learn the truth about the Southerland family's Old Friend when Joe arrives, armed with lead-cored wooden bullets. He's dealt with Matthew's enemies before. Maule is over five hundred years old...

And once he was known as Count Dracula.

Angie Hoban found Valentine Kaiser waiting for her just where he had said he would be, occupying the end booth in a busy street-level coffee shop just off Michigan Avenue, a little south of the Water Tower. From outside she could see through the window that he was watching the entrance, and as soon as she came in through the revolving door he got to his feet, smiling. Tall, youthful, and actually one of the handsomest men she had ever seen. he was pulling a business card out of his vest pocket now, and as soon as she came within reach he handed it to her.

A flashy printing job, she noticed, red on yellow. The message was simple enough:

At the bottom were two phone numbers with different area codes, both of them somewhere in California, if Angie could trust her memory on such matters; she'd visited the West Coaast a couple of times. There wasn't any address on the card; the implication seemed to be that Valentine Kaiser moved fast, so did his business, and if you had to mail him a message or travel to his office, you weren't going to reach him in time anyway.

She dropped the card into her purse, thinking that she could always throw it away later.

"And you're Angelina Hoban. Even prettier than you sounded on the phone." He spoke in a low voice, as if musing to himself, and didn't wait for her reaction; any way she wanted to take it was quite all right with him.

In another moment she was sitting opposite him in the booth, and ordering coffee. In front of her companion stood another cup, almost untouched, or perhaps it had been diligently refilled by the hurrying waitress. Outside the plate-glass window, faintly steamy with October chill, Chicagoans were hurrying past as Chicagoans generally did. Inside the coffee shop things were comparatively slack, the weekday lunch-hour rush having abated hours ago.

"So, what's this all about, Mr. Kaiser? You said something about a talk being to our mutual advantage?"

"Call me Val," the man across the table said, smiling. Then he paused, as if he were trying to plan his answer carefully. His behavior in the flesh reinforced an impression she'd formed during their brief phone conversation. Certainly this was not a man who'd try to drown her in a gush of salesman's or press agent's babble. The sincere type. Angie suspected that he was some kind of salesman, though, and that he could be very convincing if he did lie. The scar of some old injury, or blemish, spread over a large part of his right cheek, but too faintly to destroy his looks. Dark, Mediterranean type, though not tanned -- she'd heard somewhere that tan had been out for a couple of years now among Hollywood people, among celebrities in general, she supposed. And what exactly did a Celebrity Publicist do?

Sizable shoulders, and a lean waist under the vest of his three-piece, blue-gray suit. Most likely a college athlete somewhere, only a few years ago, and still in very good condition. Red tie, white shirt, all in all a sharp dresser, though a little more conservative than she would have expected from California, which she sometimes tended to identify with Hollywood.

"I understand," said Kaiser, evidently having completed his mental preparations, "that you're going to have the pleasure of paying a visit to Mr. Matthew Maule this evening."

"Who told you about that?"

"And, you may well ask, what business is it of mine? You're quite right, I can't argue." Valentine Kaiser smiled engagingly, displaying excellent teeth, probably not capped. "I'd love to tell you who told me, but the fact is I promised I wouldn't, and I keep my promises. I do happen to know you're engaged to John Southerland--right? And the Southerland family, as you know, has a connection with Mr. Maule. And--let me just put it this way--certain members of the family would like to see that Mr. Maule finally gets credit for a lot of the great things he's done over the years."