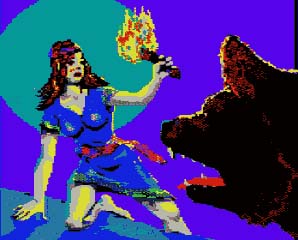 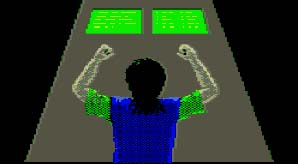 Duncan's heart sank utterly, for he knew the wolf had beaten him, had destroyed this moment on which the rest of his life depended. He was a herdsman. And if he could make himself forget the sheep, he could not want to forget Colleen.

"Destroy the wolf! Kill it!" he choked out.

"The killer! To destroy the killer! That is the only wish I can make!" He could stand the presence of the god no longer, and ran away through the cave, weeping for his ruined life. He ran to find Colleen. 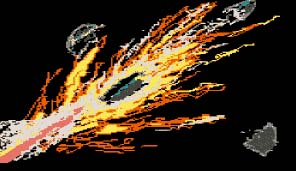 Recall, shouted the electronic voice of the berserker. Trap. Recall. Hearing, its scattered brood of scout machines rose at top acceleration from their planet work, curving and climbing toward their great metal mother. Too slow. They blurred into streaks, into fireworks of incandescent gas.

The berserker was not waiting for them, it was diving for deep space, knowing the planet-weapons reached out for it. It wasted no circuits now to compute why so much life had been sacrificed to trap it. It saw new forcefields thrown up ahead of it, walling it in. No escape. Dispassionately the berserker computer reversed engines, and the machine hurtled once more toward the planet. There was a chance, with a final charge, of destroying a little more life. 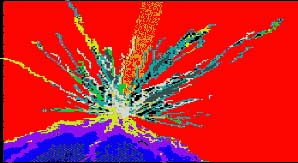 The whole sky was in flames, the bones of the hills shuddered underfoot, and at the head of the valley the top of the mountain was torn away and an enormous shaft of something almost invisible poured from it infinitely up into the sky. 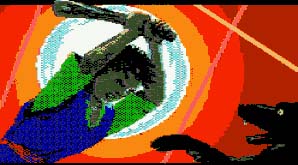 Duncan saw Colleen huddling on the open ground, shouting to him, but the buried thunder drowned her voice. The sheep were running and leaping, crying under the terrible sky. Duncan saw the dark wolf among them, running with them in circles, too frightened to be a wolf. He picked up his club and ran, staggering with the shaking earth, after the beast. He had given up everything to kill this wolf, and now the gods were raging.

He caught the wolf, for he ran toward it, while it ran in circles without regard for him. He saw the sky reflected in its eyes, facing him, and he swung his club just as it crouched to leap.

He won. And then he struck again and again, making sure.

All at once there was a blue-white, moving sun in the sky, a marvelous sun that in a minute turned red, spreading itself out to vanish in the general glow.

Then the earth was still at last. The mountain was dark against the rainbow sky. 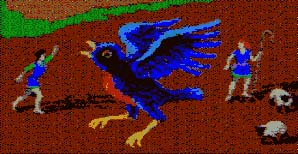 The birds were up from the fields, crying and whistling morning, for the shaking had driven them from their nests, and they thought the sky was daylight.

Duncan walked in a daze, until he saw Colleen trying to round up the sheep. Then he waved to her, and trotted after her to help. The wolf was dead, and he had a wonderful sign to tell. The gods had not killed him. Beneath his running feet, the steadiness of the ground seemed permanent.