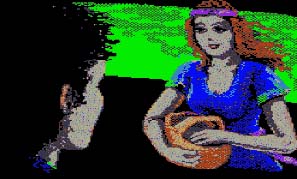 "Hello, Duncan the Herdsman. My father sent me to ask about his sheep."

He ran an anxious eye over the flock, picking out individuals. Praise be to gods of land and sky. "Your father's sheep are well."

She walked closer to him. "Here are some cakes. The other sheep are not well?" Ah, she was beautiful. But no mere herdsman would ever have her.

"Last night the wolf killed again." Duncan gestured with empty hands. "I watch, I light fires. I have a spear and a club, and I rush at him when he comes, and I drive him away. But sooner or later he comes on the wrong side of the flock, or a sheep strays."

"Another man should come from the village," she said. "Even a boy would help. With a big clever wolf, any herdsman may need help."

He nodded, faintly pleased at her implying he was a man. But his troubles were too big to be soothed away. "Did you see the sky-flash, last night?" he asked, remembering with bitterness his joy when he had thought the sign was his.

"No, but all the village is talking about it. I will tell them about the wolf, but probably no man will come to help you for a day or two. They are all dancing and talking, thinking of nothing but the sky-flash." 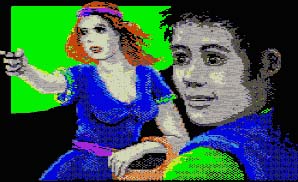 It was the priest, rushing past half a mile from them on his way down valley from the Caves, doing his best to make his donkey gallop toward the Temple Village.

"He may have met your wolf," Colleen suggested.

"He doesn't look behind him. Maybe in the Caves he received an important sign from the earth-gods." 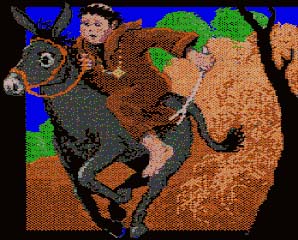 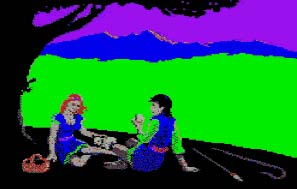 They talked a while longer, sitting on the grass while he ate the cakes she had brought him.

"I must go!" She sprang up. The sun was lowering and neither of them had realized it.

"Yes, hurry! At night the wolf may be anywhere on the plain."

Watching her hurry away, Duncan felt the wolf in his own blood. Perhaps she knew it, for she looked back at him strangely from the hilltop. Then she was gone. 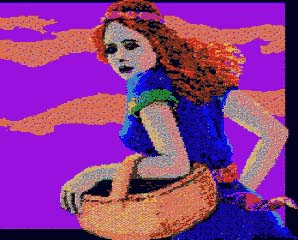